I wish to inform you that I have deleted my instagram account. Months and months of seeking rare photos of Lucy, colorizing them have all been deleted.

It's all thanks to one "fan". Nah. I'm just sick and tired of dealing with people.

You may still come here to read past posts though.

See you!
2 comments:
Email ThisBlogThis!Share to TwitterShare to FacebookShare to Pinterest 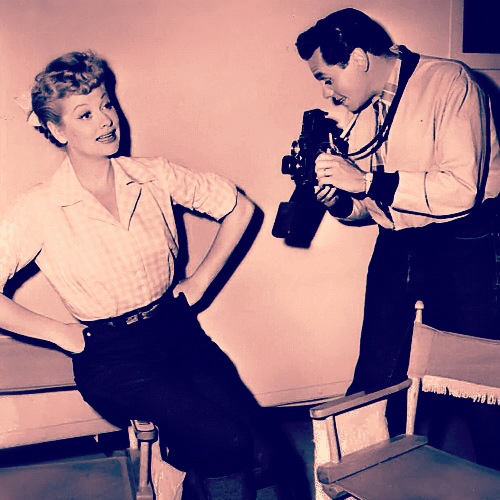 "Desi was very interested in photography. He was also a sentimental man who liked to chronicle his life with Lucy. (...) She (Lucy) once told me that he has hundreds of albums with pictures of her. I thought she was exaggerating. She was not."

"You often see Desi with his camera in Desilu Inc., and at the I Love Lucy sets, Desi would snap pictures of her (Lucy) as she posed."

I wish more home videos and personal pictures of Mr. and Mrs. Desi Arnaz can be released, but it would be asking for too much, wouldn't it? It's just that it warms me up when I see them together.
7 comments:
Email ThisBlogThis!Share to TwitterShare to FacebookShare to Pinterest

Here's an extremely rare color picture of the I Love Lucy cast after a scene. 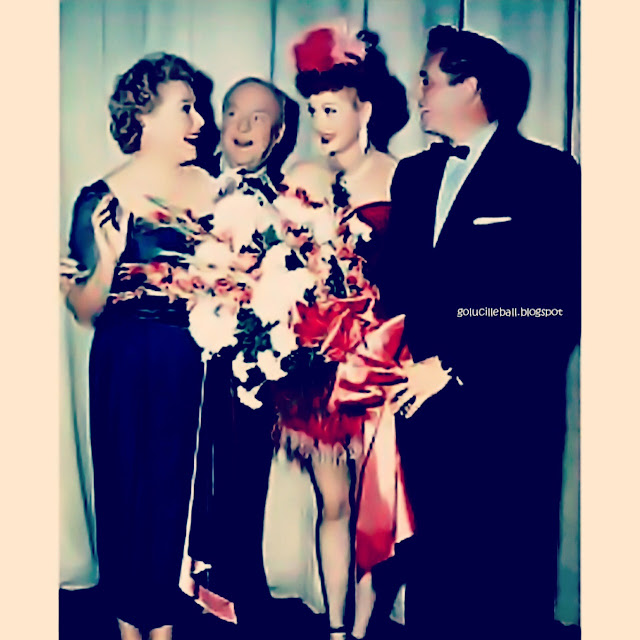 I'll like to clarify once again that the dislike that William Frawley and Vivian Vance had for each other was exaggerated. Please remember that it was the period where the whole world loved this television program. Everyone bought merchandise that would remind them of I Love Lucy. It's like the Titanic craze, remember? Everyone bought t-shits, key chains, notepads, erasers-- anything that would remind them of the (awesome) movie.

Of course people would exaggerate things.

It's known to many that Vivian Vance indeed said "champagne for all!" in a club upon hearing the passing of Bill Frawley. However, the publicity people conveniently left out the second part, "it's a pity that (...) the world lost a deeply humorous... and talented man."

Vivian just didn't want to be romantically linked with an unattractive older man on television. Bill was at the age where he had lost his charm and former suaveness, so he got offended. So, Viv would be sarcastic to him, Bill would play childish tricks on her. And Desi and Lucille and the I Love Lucy family would roll their eyes. That's all.
1 comment:
Email ThisBlogThis!Share to TwitterShare to FacebookShare to Pinterest

Here's a photo request from one of my Instagram followers. Sorry for posting it up late. This is actually a screenshot from one of her movie musicals, Best Foot Forward. She was playing the piano and singing. Actually, someone was doing the singing for her.

I often wonder why the movie producers, Desi, and even Lucille herself thought that she couldn't sing. She wasn't the Judy Garland standard, but she was certainly above average! Have you heard her on Dance, Girl, Dance? She was all right there!

Anyway, unlike Lucy Ricardo who lacked talent, Lucy Ball could play the piano. At home, she often played the piano for Desi while he sang and rehearsed for his band performances. Desi even bought her an organ after the birth of little Lucie.
3 comments:
Email ThisBlogThis!Share to TwitterShare to FacebookShare to Pinterest 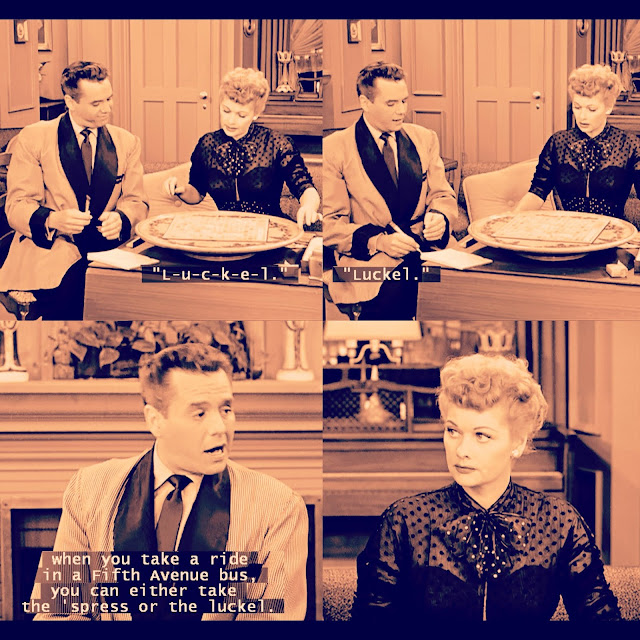 Desi and Lucille retained that innocence when couples just started dating who were hopelessly smitten with each other. That would be the period where they would find anything amusing.

If you have watched the documentary Lucy and Desi: A Home Movie, you'll see clips of them acting childlike and silly when they were first married. They dressed in costumes, partied, teased and horse played, took adorable pictures and videos of each other, and thoroughly enjoyed the company of each other. I suppose that they were able to throw away their adult problems momentarily and return to the carefree childhood. Too bad they became the main source of unhappiness for each other 2 decades later and had to separate. People change; external circumstances never stay the same. However, Desi and Lucille loved each other in spite of all the mistakes... till the very end.

That magic between these two is the ingredient that makes I Love Lucy so successful.
1 comment:
Email ThisBlogThis!Share to TwitterShare to FacebookShare to Pinterest

Do you know? Lucille Ball was actually quite reluctant in doing the movie, Too Many Girls. 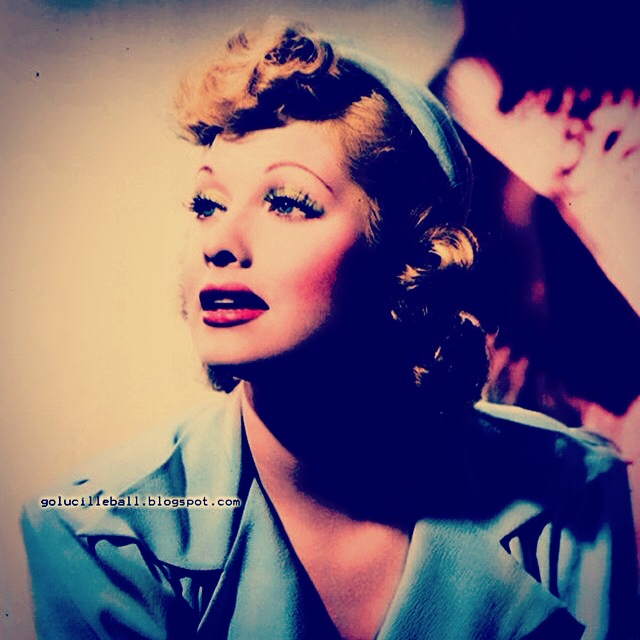 First of all, she felt that she was too old to play a role of a co-ed. She was in her late twenties that time. She didn't want to be criticized by anyone, especially her fans.

Second of all, she was also making a movie, Dance, Girl, Dance, where she was a sexy and rowdy burlesque queen. She was afraid that she could not "get into" the role and be convincing.

She couldn't have been more wrong: Lucille looked wonderful and young and fresh in the movie! She was also wonderful in her acting. I always have problems linking the movie "Lucy" with the television "Lucy", and even for each movie that she has made, she was different. This is a rare quality that most actors do not have. Lucille was certainly versatile.

I think that we take it for granted when we study history. What makes history so fascinating to me is that I keep reminding myself that the characters that we are studying have no idea what the next moment would be. We know it not because we're clairvoyant, but because we're looking back into the past. I just feel that timing is really important. Lucille was in RKO at that time, and RKO was milking her "never say no to movies" attitude. She was easygoing and amazingly agreeable back then because she would never say no to any opportunity for learning. Because of her circumstances at that time, she met another actor in the movie, fell in love with him, eloped with him, made I Love Lucy, became the first pregnant woman on television, America's favorite redhead and queen of comedy.
1 comment:
Email ThisBlogThis!Share to TwitterShare to FacebookShare to Pinterest 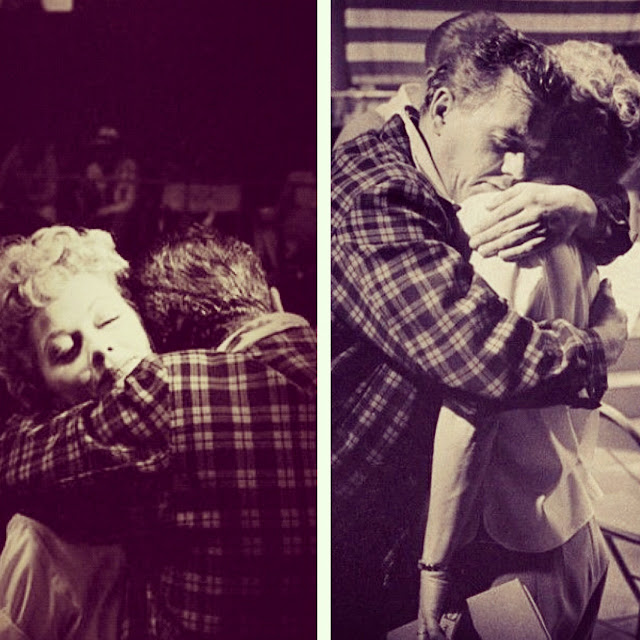 The infamous divorce had left Lucille Ball vulnerable. It was, in my opinion, the most important event that explained why she became embittered thereafter. She was devastated that she had disappointed millions of I Love Lucy fans and was terrified to know if any of them blamed her. She also guarded against reporters and other media members who might want to dig out dirt about her failed marriage. Mostly, she didn't want Desi to be hurt, but as a perfectionist, she didn't want to come to terms with her failure, and she was publicly humiliated. Lucille never got over the great love story. It was hard on her because she loved acting and in order to continue doing so, she had to stay in Hollywood, where all the painful memories and vicious traps existed. She really had a love-hate relationship with Hollywood.

She assumed an aloof, cold and arrogant persona when being interviewed, and in her professional and private life, she was unforgiving, harsh, and her heart basically closed. Fans who are intimate with Lucy Ricardo will definitely be shocked: the just cannot connect that zany, lovable character with the other Lucille Ball that appeared on talk shows. That just shows you how damn talented she was as an actress because in actual fact, even though young Lucille was not either extreme, she certainly was a "hard-bitten show girl", who was warm and sweet to a specially selected few. Lucille didn't do that physical comedy act in real life (but she certainly had a great sense of humor). That was why Desi didn't want her to appear on talk shows; he knew that the audience would be shocked.

However, people should give her true character some credit. Lucille could display spontaneous humor if she wanted to! The fact that she was so humble and self-effacing and kept claiming that "I'm not funny, what I am is brave" created a self-fulfilling prophecy and she (and others) ultimately believed that she was void of humor. Watch candid videos of her, you'd be surprised that she would occasionally throw hilarious comments every now and then.

She really had no idea how much she was loved. Her fans loved her just as much, and more surprisingly, you'd realize from viewing YouTube videos of interviews with the post-divorce Miss Ball that everyone regarded her with such high esteem that even the most vicious talk show host would be careful in skirting this topic.

She must have intimidated her family and friends a lot, because no one managed to open up her heart again. I'd like to think that she finally did, 2 days before Desi's death, because she told him "I love you. I love you, Desi. I love you," over and over again as she wept. It was the saddest but most beautiful moment, sad that the two people who were meant to love each other were about to be separated by life and death, beautiful that she finally made the leap to express her love openly. Lucille really had an astounding capability to love, and this is evident if you would study pictures and videos of her, and come on, she endured a marriage full of alcohol and whores because she loved Desi so much, didn't she, but this capability for love was buried deep in her.

I really love her.
10 comments:
Email ThisBlogThis!Share to TwitterShare to FacebookShare to Pinterest
Older Posts Home
Subscribe to: Posts (Atom)