The legendary movie that brought two amazing people of different cultures and races far apart together.

Sometimes, it's just fate. The cards are already laid on the table, the draw already planned. 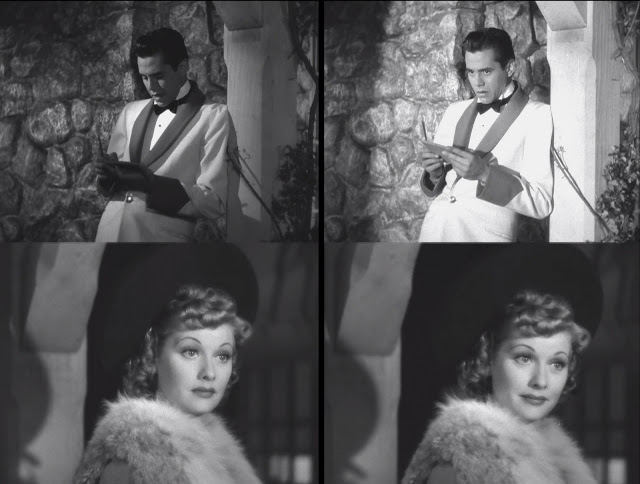 They were already going out together before the movie was officially made.
They were instantly attracted.
The courtship was exciting to watch-- they were like instant kissdolls.

It was love at first sight, or according to Lucille Ball, it took exactly 5 minutes to fall in love with Desi Arnaz.
No comments:
Email ThisBlogThis!Share to TwitterShare to FacebookShare to Pinterest

Lucille Ball was actually a remarkable singer, and it was on a rare occasion, such as in Dance, Girl, Dance, when her singing wasn't dubbed.

I wonder why her singing was dubbed in other movies.
No comments:
Email ThisBlogThis!Share to TwitterShare to FacebookShare to Pinterest

Lucille Ball was dedicated to her career. The catfight between Maureen O'Hara and her was real, because they wanted to keep it real.

Of course, they were close friends in real life!
No comments:
Email ThisBlogThis!Share to TwitterShare to FacebookShare to Pinterest

Is it me, or did I really notice a slight change in Lucy's face when Bobby the bellboy in The Star Upstairs gave her a backhanded compliment on her appearance? 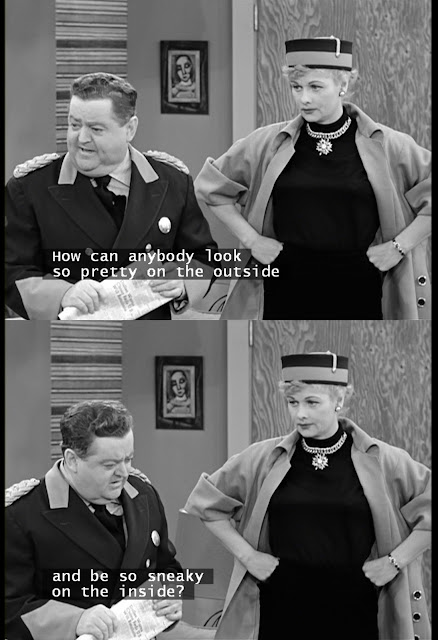 Keep a lookout for this scene. She was trying not to smile. And she was not just pretty, she was gorgeous!
No comments:
Email ThisBlogThis!Share to TwitterShare to FacebookShare to Pinterest

Ricky thought Lucy was trying to hint him that her birthday was coming. 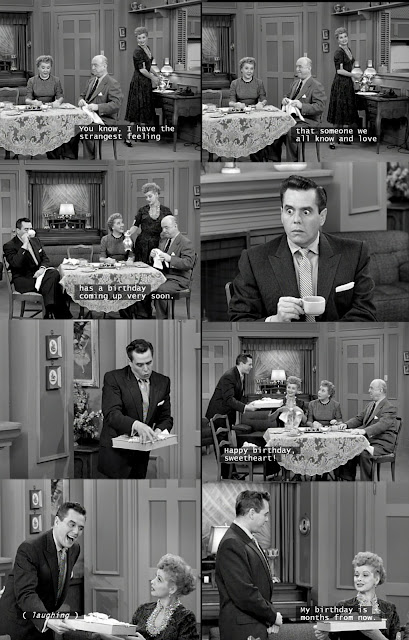 He had an emergency present stashed away. 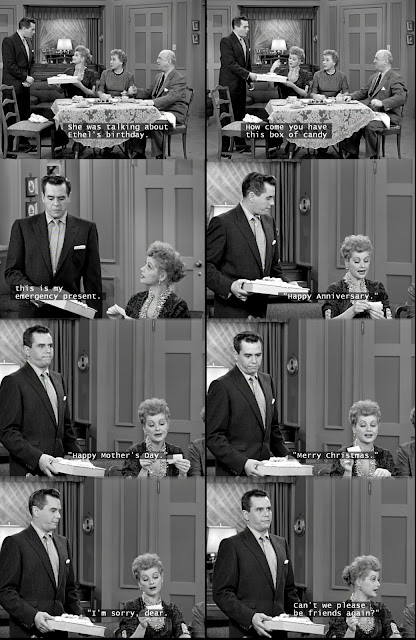 In real life, Desi Arnaz was a sentimental husband-- he never forgot important dates, and he had always spoiled Lucille Ball with expensive gifts. He was extravagant with her; never a pinch penny.

In fact, Lucy said that if she was melted down, what left would be a pile of gold.

Each wedding anniversary, and even after the divorce and till their deaths, Desi had always sent a big bouquet of red and white carnations.
1 comment:
Email ThisBlogThis!Share to TwitterShare to FacebookShare to Pinterest

She was a brilliant actress who excelled in all genres of acting.

And yes, that's Maureen O'Hara!
No comments:
Email ThisBlogThis!Share to TwitterShare to FacebookShare to Pinterest

Soon after she received Desi Arnaz's touching telegram, Lucille Ball traveled to Milwaukee to appear in a benefit. This engagement was supposed to last one night, but one night stretched in five. Desi had made her promise to return to New York immediately after her Milwaukee engagement and he became as mad as an ant on a hot pan as she was held up at Milwaukee longer than expected. Moreover, it was in November and the snow was falling down hard and quick. He became suspicious and thought she was having an affair.

Was it possible for Lucy to return to New York into Desi's arms? 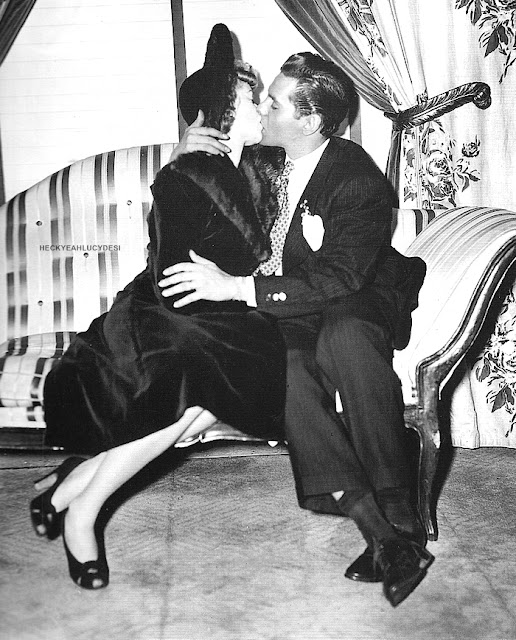 One midnight, Lucy took Desi's long distance call at the hotel lobby. She was tired from working, and he was yelling into the phone, with his strange accent "I know why you're stalling, you crumbum. You're screwing the mayor. And there's a very handsome actor playing in the scene with you, Joseph Cotten. Are you screwing him? Is that why you're stalling?" 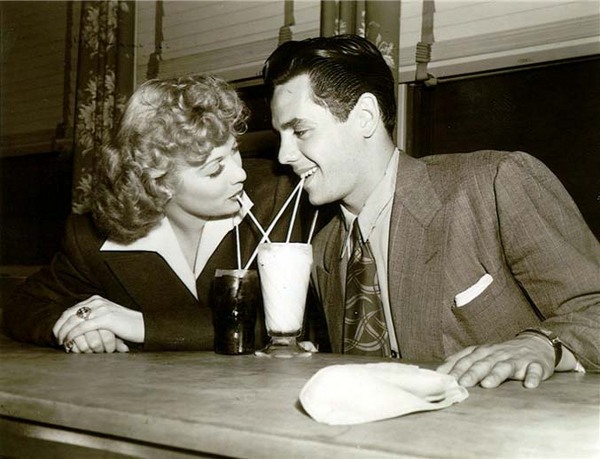 Of course, being the woman with a hot temperament, Lucy was not going to take the accusations lightly. She in turn, accused him of being involved with every woman in every town he was in, and hollered right back "I don't even know this Joseph!" She had forgotten where she was- the entire lobby was at a standstill as everyone eavesdropped on her end of the conversation. It was no mystery who the person on the other end of the line was. It so happened that Joseph Cotten walked in and immediately, Lucy said to Desi "I got to go. I'll see you first thing in the morning," and hung up.

Lucy marched up to her hotel suite, still boiling mad at Desi, and told her personal maid, Harriet that she was going to charter a private plane and leave for New York right this minute. Her maid would follow her the next day, with her clothes and other personal belongings. When she returned to the lobby, Joseph was still there-- he kindly drove her to the airport.

Braving the snowstorm, Lucy finally reached New York and checked into Hamsphire House. Exhausted, she fell into a deep lumber till noon the next year, and then waited for Desi to appear between his shows at the Roxy. Just then, a reporter requested to interview Lucy on the article "Why I Will Always Remain a Bachelor Girl". She accepted it as she wanted to keep Desi waiting-- she was still mad at him. In her hotel room, she cited all the reasons Desi and her were never going to get married, and that their differences would never be resolved. Of course, she would continue seeing him, just as friends.

Finally, the lady reporter left. The two lovebirds had not seen each other for a long time. They wasted no time but to apologize for all the nasty accusations they had made about each other, kissed, and made love, all in a hurry as Desi had to return to the Roxy and do the next show. 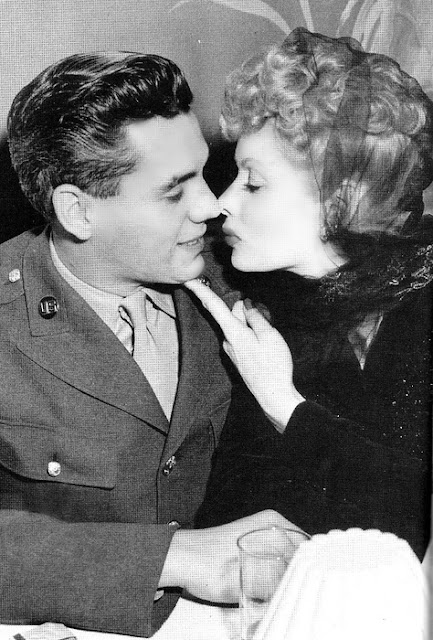 As Desi was dressing and leaving, he said "This girl is going to have a hell of a time with that story."

"Why?" Lucy was curious, and becoming increasingly excited.

"Because I have everything arranged to marry you tomorrow morning, if you would like to marry me."

"Where?" Lucy was lost for words.

"In Greenwich, Connecticut." He shed light on her that he had been adamant on wanting her back in New York as soon as possible because he had already postponed the elopement 5 times.

"But I thought we decided that we couldn't get married."

"Why couldn't we just live together?" she asked.

"Of course I want to marry you, you idiot! Aren't we supposed to wait for three days for a permit or something?"

"I got the whole thing straightened out. I've already gotten a permit, and the judge to give us an exemption. You love me, don't you?"

"I love you very much too. So what the hell else is there? I have to go now. I'll be back after the next show." 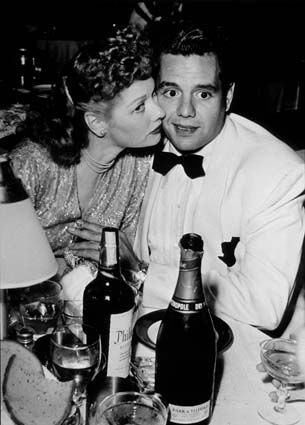 It was a hectic day for Desi. But he had never been happier. Years later, he could recall the exact details of this unorthodox and poignantly sweet proposal. So could Lucy.
No comments:
Email ThisBlogThis!Share to TwitterShare to FacebookShare to Pinterest 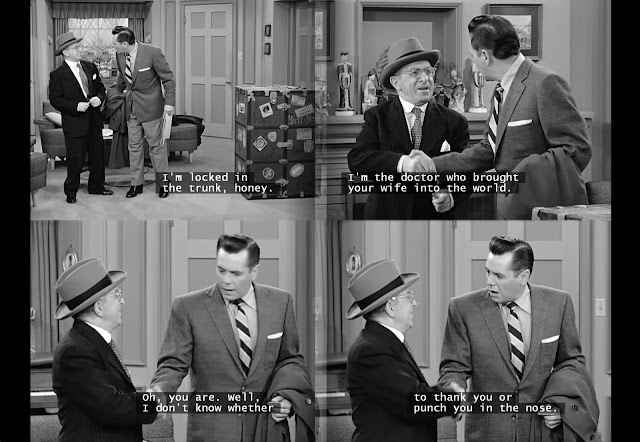 No comments:
Email ThisBlogThis!Share to TwitterShare to FacebookShare to Pinterest

2 December marks Desi Arnaz's death anniversary. It was the day when Lucille Ball lost the most important thing in her life- forever. I'm sure it broke her heart as her health started to decline shortly. There were just so many mistakes they wished they could undo. One "I love you" wouldn't suffice. They had to repeat and enunciate their love for each other, over and over again.

Desi and Lucy had been involved in serious discussions of why they should not get married. Their outlooks on life were different: he was a rich kid in Cuba and had speedboats and horses before the Revolution happened, she was poor and didn't even own a bicycle. He was a believer of being the master of the house as a man, she was independent and self-sufficient. He was a bandleader who loved to be on the road, she was committed to Hollywood. He was a romantic who lived to enjoy life and not worry about the future, she was a realist. 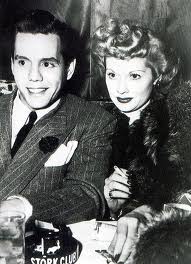 They finally decided that they shouldn't get married. Lucy of course, was devastated. She went along with the promotion of her pictures, smiling, shaking hands and signing autographs for her fans, but she had never been more depressed in her life. 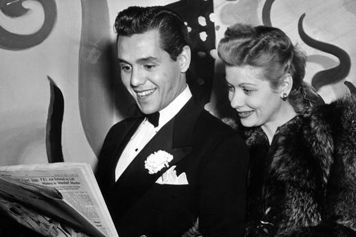 Yet, the saying that "opposite attracts" was the case...

The jealousy, possessiveness and passionate love kept them wanting for more of each other. The attraction was too powerful.
No comments:
Email ThisBlogThis!Share to TwitterShare to FacebookShare to Pinterest

We have Star Trek thanks to Lucille Ball.
Desilu Productions merged with Paramount Television. So movies today are part of Desi Arnaz and Lucille Ball's genius!

Imagine, a poor Cuban who escaped from the Revolution and a poor American whose father died early became a bongo drum bandleader and a model, then a Broadway actor and a Hollywood B movies actress, then got married, produced I Love Lucy, and bought over RKO Pictures, formed Desilu Productions, and merged with Paramount.